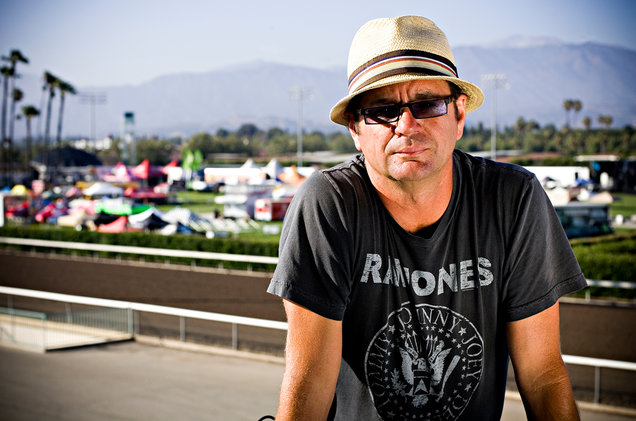 From Woodstock to Coachella, music festivals have been a mecca of not only music but also for free expression and the arts. ACCESS Event Solutions has had the opportunity to work with a variety of music festivals, from small to large scale, country to punk rock festivals, we’ve seen it all. One festival that we have had an ongoing relationship with has been Vans Warped Tour.

Not familiar with Warped Tour? It was the longest-running touring music festival in Northern America, having a 25-year long run. It also traveled aboard playing shows in Australia, Japan, Europe, and New Zealand.

Referred to by many as “Punk Rock Summer Camp”, it was the start for many artist careers such as Eminem, No Doubt, Katy Perry, and many more. It also was headlined by major bands in the genre including Pennywise, NOFX, Bad Religion, and Rancid.

The mastermind behind the festival was Kevin Lyman, a Cal Poly Pomona grad who was involved in the skating and music scene and incorporated both those loves into the Warped Tour. According to Lyman, Warped Tour was the clear option, “I got my degree in Recreational Administration, I thought I’d be running a summer camp. I had put on a lot of shows throughout college and this was something I had experience in.”

With a multi decade background in the music and festival scene it only seemed fitting to ask him about music festivals and the growing popularity they’ve experienced.

When does the planning for a festival start? According to Lyman, “It never stops, once you start you never stop, it’s a full-time job. Most festivals start their planning a year out. I planned for Warped tour 9-10 months before. September and October were when I’d be booking the talent.”

For most festivals, as soon as they’re ushering you out, they’re announcing the dates for next year. A great deal of time and planning goes into making sure that talent is booked accordingly and that it fits the audience that that festival is trying to bring in.

So, is there such a thing as a dream line up? “You’re never going to make everyone happy. Announcement day is the greatest day and worst day because some people will love it and some people will hate it.” Lyman has experience with this, with the growth of social media, people can let you know in a matter of seconds whether the lineup is great or a fluke.

Talking about line ups, what are some of the biggest trends? According to Kevin, “ Niche specific and artist curated festivals are not just the future but are already happening.” We couldn’t agree more with Kevin as we have now created the credentials for both years of Posty Fest which was created by Post Malone and has taken place in his home state of Texas. We have also been the credential provider for New Found Glory’s BreakFEST music festival that is centered around the most important meal of the day, breakfast and punk rock.

Although niche specific and curated music festivals are the future for festivals, Kevin did have this piece of advice to those wanting to get involved in the industry, add a philanthropic aspect to it. Kevin is currently teaching a class at USC that is helping create the 320 Festival. Kevin has been laying the foundation for integrating philanthropy into festivals. These students are taking that foundation and making something of their own.

Security is one of the most important things of a festival. This is a topic that has sparked a large amount of conversation in recent years. According to Lyman, “You’re only good as your weakest link, are you getting quality employees? Festival staffing is difficult and 30% to 50% of cost alone is on security.” The biggest take away being to make sure that you are hiring quality security and allocate a budget to do so.

As for your event credentials, you can make sure that they have hot stamp foiling, variable data name and photos, and cold lamination, to avoid them from being counterfeited. All our event credentials are high quality and durable making it easy to identify if someone has created a fake credential.

With everything in life, there will be first time mistakes that everyone will make and learn from. These were some of the first time blunders that Lyman outlined, overbooking on talent, thinking that your festival is going to be bigger than it is, and losing money is easier than making money. The solution to these blunders? Patience. Lyman couldn’t stress this enough, you have to be patient when it comes to putting together a festival. “Be patient and curate it well, don’t overbook it and build a community.”

A Lifetime of Achievements and Relationships

Seeing as Lyman has been in this industry for decades now, it was only fitting to ask about his biggest career highlights. “Warped Tour Exhibit being placed in the Rock n Roll Hall of Fame. It was only supposed to be there for a month and has now been kept up there for eight months. Another accomplishment has been watching bands grow into great citizens , one person I can think of is Katy Perry who continues to help the community” were the highlights that Lyman feels are some of the biggest.

ACCESS’s relationship with Lyman goes past Warped Tour as we have also produced credentials for Mayhem Festival, Brewbies, 320 Festival, which are all put on by the Kevin Lyman Agency. So why ACCESS, ” I’ve known Seth forever and see the team as an extended production company. There is a loyalty factor and they have helped us with our nonprofit and for profit events in any way they can.”

It’s client’s relationships like this that show that we are more than just a pass company that produces VIP laminates and event credentials, we also build long lasting relationships. We have produced thousands of tour laminates, satin sticky passes, and custom wristbands for the Kevin Lyman Agency and won’t be stopping anytime soon. We hope that we can do the same for you, contact us today about becoming your premier event credential provider!